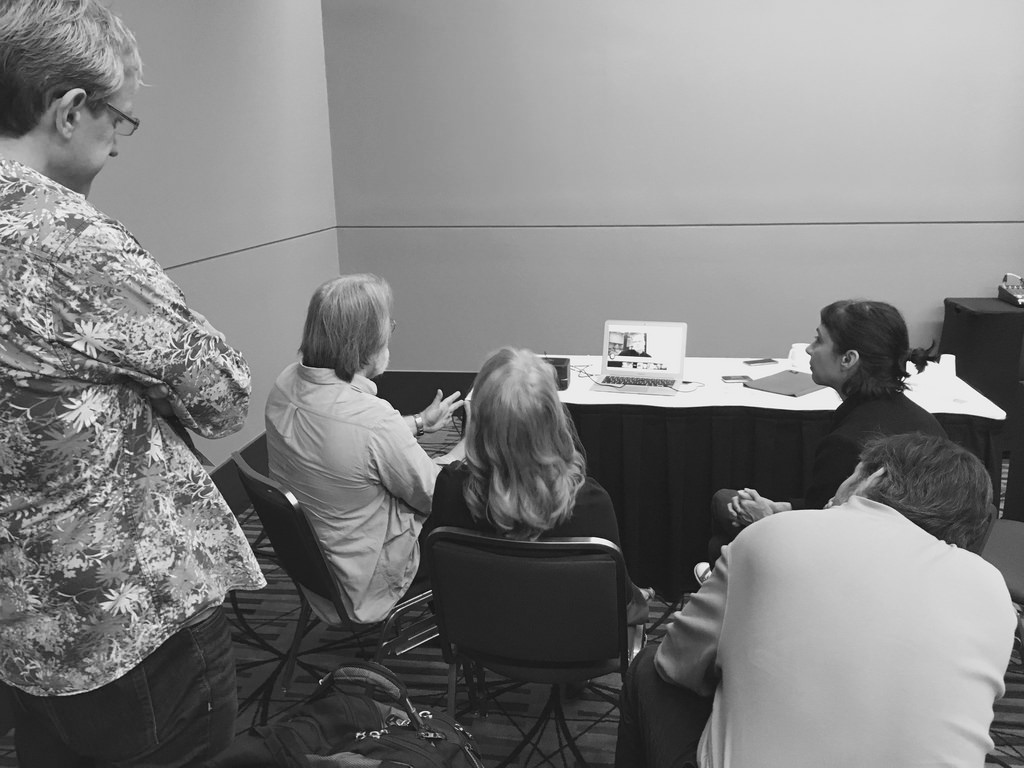 Through my work with Virtually Connecting I do a lot of synchronous video calls so I’ve developed some thoughts on formats, techniques, and technologies. Though warning – I will NOT be advocating, admonishing, reviewing, or even mentioning by name any specific brand of technology for sync video in this post – cause that is how I roll. I see more and more people doing sync video conversations so I’m hoping this will be helpful or start further conversation.

Sync video is not always the answer. You have little time for reflection in sync conversations so you need to be more “on”. There is something more vulnerable about sync video than other kinds of technologically mediated communications. Still, as with most things, opening to that vulnerability brings possibilities of a rich experience. Seeing facial expressions instead of emojis, hearing laughter rather than just a lol; this is the kind of immediate feedback that we should be looking to give rather than numbers on a dashboard.

Use sync video when you want to have a conversation.

I’ve yet to work with any system that I really felt was 100% synchronous. There is always a little bit of a lag. You should know this going in and be okay with it. There might be times where no one is talking because they are still listening to what you just said – because it is taking longer for the audio to reach them. These days it is really much better than in the past and it should not be more than a couple of seconds on a day when you have a bad connection for whatever reason. However, if it is too bad you may have to look for other options.

The problem is that those silences do not feel good. They break up the flow and make things seem off. Even in face to face conversations we have all had awkward silences, the technology cannot help with those. If you are trained in media studies then the feeling is even going to be worse for you because you have been conditioned to avoid “dead air”. If you are broadcasting or recording your conversation then it can be even worse and you may even face the opposite problem where everyone is so afraid of dead air that they step on one another trying to avoid it. You don’t have to fear dead air. You can warn your participants about lag before the conversation if they are new to sync video and let them know that natural pauses for reflection and listening are normal and okay.

At the same time there are moments where hospitality can avoid awkward dead air that is not needed. The most obvious for me is when you have a large group and you ask them to do introductions. They don’t know what order to go in. Sync video gets strange with two people starting at the same time. No one wants to go first and no one wants to step on anyone else. So, everyone just sort of sits there looking at one another. Here is where I think you need someone to host. Someone needs to call on people and invite them to introduce themselves. If everyone knows one another really well maybe you don’t need this but it is still nice. I have tried to organize the order before hand or even in the moment and communicate it out to everyone but it just never really works for me. People always forget the order, they are not looking at the chat where I posted the order, or they think the order is different than what I said. It just seems so much nicer to me to just invite people one by one to introduce themselves.

When you first start doing sync video you might think it is the video that makes it a rich conversation. Well, yes and no. I have a sync video project right now where students will be paying particular attention to nonverbal cues while someone is telling a story. It is a listening exercise. Here video is going to be key. In my past I’ve done some work with the deaf community in terms of sync video – again video is key. Is video really needed for your conversation?

If it is not really needed I would still argue that it can make for a richer conversation; so I’m not saying don’t do video unless you absolutely need it. However, technical issues can make it so that you need to back off. Video takes a lot of bandwidth and if you are in a lower bandwidth situation turning off your video can free things up so that you can continue what is important – the conversation.

And the one everyone forgets – I bet you have a phone. If technical issues around video are too much, call the person. One of my favorite stories is when I was set to have a sync video call with Bob Cole and Joe Antonioli and as the time neared I happened to be backchanneling with Sean Michael Morris when it became clear that it would be great to have him on the call. But Sean was in a coffee shop with really limited wifi. We tried, but it was no go. So I was like “hey you have your phone don’t you”…. I had to put Sean on speaker and hold the phone up to my mic when he wanted to speak, but you know what – we had that conversation.

I think it has something to do with the immediacy of it. And yes, it is visual but so much of it is the audio in sync with the visual. However, I think some of it is tactile too – where the vibrations that someone makes come through to me in almost realtime touching my ears or when I see someone throw their hair to the side and get some sense of its texture.

Different platforms treat visuals differently and video may only be one element. Some try to be everything to everyone and break the screen up into other boxes. A box for video, a box for sharing documents, a box for chat, a box for listing the participants, a box for drawing on a whiteboard… If you are working with something like this take time to think about the environment and what is most important. If the conversation is most important make the video the big box and put it in the center. If this is the case look at your lighting and make sure you don’t have a light source behind you like a window. Think about your physical environment, your background, tidy up or even think about things that might be nice to have in the background.

When having a conversation with more than one person different platforms have different approaches. Some privilege the speaker, having a large video of one camera at a time with smaller thumbnails of everyone else on the bottom. The person who appears on the large part of the screen is determined by the audio – whoever has the mic’s attention has the floor. Other times the video is controlled by a host. Still, some platform layouts shrink the video of everyone as members join the call to give equal screen real estate to all. What is best? What kind of conversation do you want to have?

I’ll be honest, I’m biased toward the speaker getting the camera. Listening is done with more than the ears and if someone is speaking I want to see them. I get that it visually minimizes everyone else. I’m sympathetic to the argument for equality that some make for the set-up that shares the space with all. Using this layout I have felt more like everyone is present and no one is any larger than anyone else but I’ve also been distracted by someone who is not speaking who is fidgeting or something. I like the ability to switch back and forth between these layouts because to listen best I like to see.

So, Why Sync Video Again?

You know what I can’t stand – webinars. Why make people come together to listen to you if you are not going to listen to them? Just record the thing and let them listen to it on their own terms. For me, sync video is about a complex interplay of combining the communication senses to further understanding, and ultimately it is about conversation. It is about seeing but it is also about being seen, it is about talking but it is also about listening, and it is about being vulnerable and being brave. It is not for everyone and it is not for every situation. There are many options, there are still many barriers, for me it is about learning and playing with the possibilities afforded through tech, design, and delivery.

Autumm Caines is a liminal space. Part technologist, part artist, part manager, part synthesizer. She is passionate about the use of technology in education and the many differing facets of how technology impacts society and culture, she likes spending time at the place where differing disciplines intersect.

She is the Associate Director of Academic Technology in the Center for Excellence in Learning and Teaching at Capital University in Columbus Ohio and she just earned a Master’s Degree from The Ohio State University in Educational Technology. Autumm is deeply involved in the Virtually Connecting movement and uses her work in Virtually Connecting to explore questions of virtual presence, conversation, spontaneity in virtual environments, networking, and professional development.

(this post originally appeared on Autumm’s ‘Is a Liminal Space”)