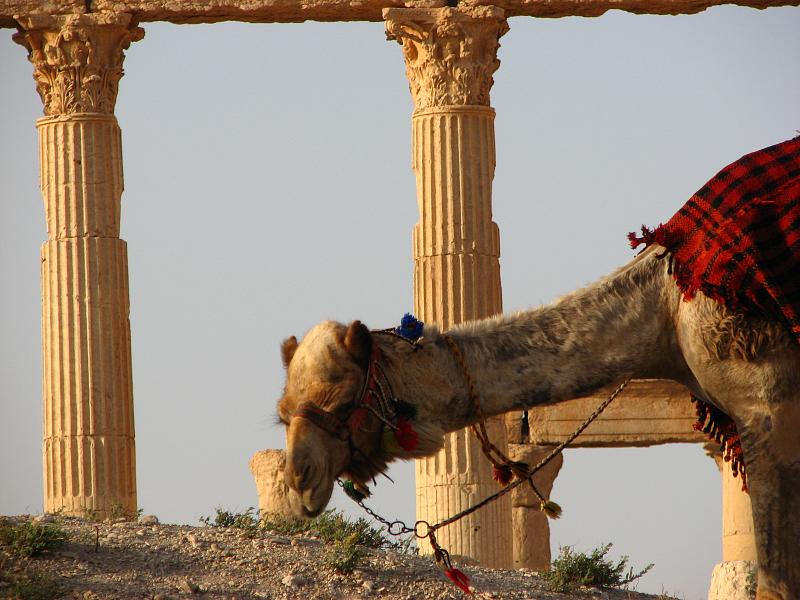 In Fall 2015, I was once again scheduled to teach ENGL 2400, World Literature I. As I was rethinking this course during the preceding summer, I considered the previous issues I had encountered with that course. It is a general education course that can fulfill both a literature as well as a global diversity (non-Western) requirement; thus, it is popular with non-majors as a course that can fill two requirements at once.

While I was considering how to redesign the course, the news was unfortunately rife with the actions of ISIS, particularly the capture and destruction of Palmyra and the tragic murder of archaeologist Khaled al-Asaad. These events focused my attention on a specific idea: cultural heritage. As I began to research the history of the term, I realized that it could hold the key to developing student interest in World Literature I. Beginning with readings about cultural heritage and recent/historical destruction, we could explore the essential question: if cultural heritage is targeted for destruction, is vital to preserve, and has cost protectors’ lives, is what we are studying inherently significant?

Students often take general education courses, such as World Literature I, without really knowing their purpose or function within their curriculum, which causes some apathetic behavior and even sometimes active resistance. One of the challenges of teaching at regional universities is that our students do not often have experiences outside the local area; we attempt whenever possible to encourage our students to see themselves in a more global context.

With all of this in mind, I began developing a unit. As part of my research, I had read Lives in Ruins by Marilyn Johnson. In her book, Johnson describes meeting Dr. Laurie Rush and the creation and implementation of the Cultural Property Protection Playing Cards for the United State military. The Combatant Command Cultural Heritage Action Group web site states that the cards “were designed to educate U.S. military personnel about the importance of respecting ancient sites and monuments and preserving host nation cultural heritage during military operations and post-conflict reconstruction.” They are organized by suits: “diamonds for artifacts and treasures; spades for historic sites and archaeological digs; hearts for ‘winning hearts and minds’; and clubs for heritage preservation.” Dr. Rush and Dr. James Zeidler published a more formal article, “In-Theatre Training through Cultural Heritage Cards.”

These cards were then the inspiration for the assignment that would tie in the first unit with the material in the rest of the class: students, after studying about cultural heritage and the purpose of the military playing cards, would create their own physical sets of playing cards based upon early world literature, decide upon the organizational principles as a class, and carry the project through a significant portion of the semester, reflecting on their work at the end. I contacted Drs. Rush and Zeidler, who were enthusiastic and supportive. Dr. Rush agreed to Skype in to my class to discuss the cards with my students, and Dr. Zeidler sent enough packs of cards for every student in the course to have one, with extras to show future classes. Their generosity prompted me to reach out to other groups who had been inspired by their work. They also sent me example packs of their cards for the students to examine.

How It All Worked Out

I have found this approach – which is active, creative, reflective, and relative – meets its intended goals. Students are far more interested in the course material, and there is little to no indication of not understanding the purpose or significance of the course material. Given this response, I recommend considering similar methods in other classes that provide students with the time and space to think about the significance of their studies, what L. Dee Fink calls “significant learning.”

What The Students Thought

In asking students to assess this approach, one commented,

“Unit 1 helped me to understand why the preservation of world literature is so important. This in turn helped me to appreciate the material that we read in class. I took this course as a requirement and honestly wasn’t expecting to learn so much about cultural values. Starting with that unit allows students to reflect on their cultural values.”

“Unit 1 definitely helped me understand why I took this course. A lot of courses I’ve taken have been simply because I had to and I always ask how is this going to relate to the real world. Unit 1 answered that question right from the start. I honestly do not think I would have enjoyed early world literature as much if I had not gained the understanding and appreciation of cultural heritage.”

Indeed, the first semester I incorporated the playing cards assignment, I only assigned it until midterm; those students recommended that it be extended for the entire semester, which I have since done.

Here’s a look at what the students made.

Kisha G. Tracy is an Associate Professor of English Studies, specializing in early British and world literatures, as well as Co-Coordinator of the Center for Teaching and Learning, at Fitchburg State University in Fitchburg, MA. She received her Ph.D. in Medieval Studies from the University of Connecticut in 2010. Her first book is available from Palgrave, entitled Memory and Confession in Middle English Literature, and explores how the traditional medieval relationship between memory and confession provides a valuable framework for understanding the employment of recollection in various Middle English literary texts. In addition, she does a lot of research on encouraging student investment in learning, information literacy, and pedagogical wikis in higher education. She is currently writing a teaching and learning book project entitled Students Are People Too. She is Book Review Editor for Currents in Teaching and Learning and on the board of the New England Faculty Development Consortium and the International Society for Exploring Teaching and Learning.

Baggini, J. (2015, Aug. 24). Why it’s all right to be more horrified by the razing of Palmyra than mass murder. The Guardian. Retrieved from http://www.theguardian.com/culture/2015/aug/24/razing-palmyra-mass-murder-isis

This work is licensed under a Creative Commons Attribution 4.0 International License.

0 thoughts on “Patch Thirteen: “Excuse Me, Why is This Important?””